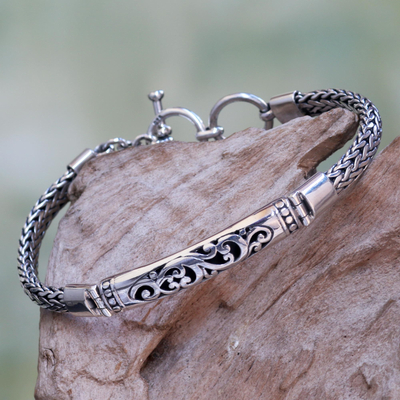 A stunning pendant with openwork resembling stylized ferns elevates this bracelet to a work of art. Wayan Asmana of Bali presents the original design, which is crafted from sterling silver. Flanking the pendant, naga chains culminate in a polished toggle clasp.

"Can not wait to give this to my wife."

Seems to be made to a very high standard and looks amazing. From the main center piece to the side chains to the clasp is high quality. WELL DONE

Beautiful piece and well made.

The craftsmanship is superb!!

Very nice, substantial weight. I like to layer it with other bracelets.

This is a beautiful bracelet and very weighty. The textures are just lovely. Very pleased.

This bracelet is so well made and SO COMFORTABLE to wear, I never take it off!

I have to say this lil guy is the most adorable ring I own! Its extremely well made & is a fabulous piece of craftsmanship. I fell in love with him immediately after I took him out of the beautiful gift bag he came in!! As far as the company goes, they are amazing to work with. I had to return my ring for a larger size & Novica worked their magic in getting me the right size and quickly got it out to me as soon as they could. They kept me informed as to when they received the first one, then again when they sent it out, then when Id get it, approximately. They even got it to me a couple weeks earlier then expected/promised. I didnt have to track my lil package! Thank you Novica for all your help! You made me extremely happy today because I got my Sammy back in speed lighting time! You are a awesome & amazing company! I couldnt get the box open quick enough to put my favorite ring back on! Sincerely yours, Sandie Leslie-Stemm Elkhart, Indiana

Beautiful and well made.

I just love it and it works with my new wider herringbone bracelet also from novice!

"This is a treasure!"

Beautifully made and it works with my smaller silver chain bracelets!

I have a pair similar to these...but with black onyx stones. Thought these were the same with garnets. Guess it is my fault for not reading the measurements...& just assuming!

This artist has dramatically improved their livelihood by working with NOVICA.

Celuk is a Balinese silversmithing center and it is there that Asmana, while still in elementary school, began to learn the art of jewelry making. His father was a well-known silversmith who taught him bon, jawan and other jewelry techniques that have been handed from generation to generation in Celuk. Now in his sixties, Asmana has taught this art to many others and is dedicated to seeing it passed to the next generation.

This artist is currently supporting and providing for the education of their children, grandchildren, or children in their community, whether it be at the primary, secondary, or university level.

Wayan Asmana has received 3 microcredit loans with 0% interest from Kiva and Novica, the first for $2850 and the most recent for $3000.

Asmana and his workers rely on the stable income that Novica sales bring. These sales are their primary source of income.

This artist striving to supporting their own or their family's basic needs and improve their livelihood.

"My jewelry is now known in many different countries... thanks to you. We hope to work with you forever. I will continue to work harder and better to please everyone. Thank you so much!"

Wayan Asmana is a master silversmith from Sukawati, long regarded as Bali's most important jewelry center. Asmana learned his craft when he was in elementary school but only when he was in senior school did his father teach him how to make gold accessories. Wayan Asmana senior is unquestionably a renowned jewelry maker and designer.

When Asmana returned to his village after going away to college, he married his beautiful bride, Wayan Asmariani. Then he set about starting his own jewelry workshop where he designed and crafted a variety of gold and silver accessories. Business began to flourish and tourists were his main customers. Unfortunately, events such as the World Trade Center attacks and the Legian-Kuta bombing had a very bad impact on Bali's tourism trade, which in turn affected Asmana's work

Setting up on his own is difficult. Asmana tells of the time, three years ago, when a foreign tourist bought almost $1,200 worth of jewelry. When the artisan went to the bank to change the dollars into into rupiah, he was told the money was counterfeit. There was nothing he could do about it.

I am thankful that God gave me a chance to work with you, he says. My jewelry is now known in many different countries, and my family and I feel so much this uplift in our economic life, thanks to you. We hope to work with you forever. I will continue to work harder and better to please everyone. Thank you so much!
View all