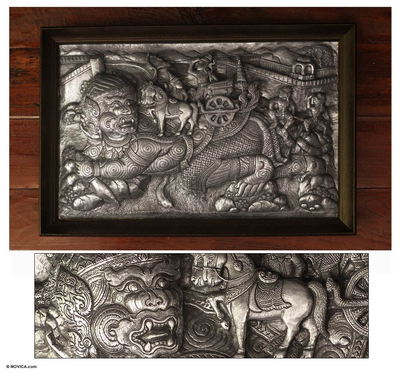 (8)
Thiva Boonnak finds inspiration in the Rammakien, the Thai version of the... more

Thiva Boonnak finds inspiration in the Rammakien, the Thai version of the Ramayana, as she crafts this aluminum repoussé panel with fierce detail. The scene pertains to the chapter in which the evil giant Kumpakan pretends to cut off the water of Ganges River that supplied Rama's camp. He asked for his ladies-in-waiting to bring him flowers growing by the riverside and after casting a spell, he began to grow and grow. He grew so much he just had to lie down across the river, and thus cut off the water. Hanuman, the Monkey King, was sent to investigate what had happened. After impersonating several maids and transforming himself into a hawk, Hanuman reported his findings to Rama, who promptly asked him to break the spell. Weak from the incantation, Kumpakan was unable to fight Hanuman and escaped to Krung Lanka, where the demon king held Sita, Rama' wife, captive. The panel is framed in noble rain tree wood.

It arrived as expected and is beautifully detailed.

Very nice framing on this carved 3D picture. I am impressed with her talent.

"What a fantastic piece!"

I have traveled all over the world, but I could not carry home things like this with me. I have one wall in my hallway dedicated to elephants....this most impressive piece stands out among the others.

A beautiful and well-made piece, with a delightful story to go with it.

The Dragon and the Phoenix I, Aluminum repousse panel

The detail of the carving is spectacular as well as the creative design. The framing and background material make the dragon stand out.

Miss Boonnaks skill in producing Duel of Elephants is a superb example of greatness in the difficult art of repoussee (a form of metal sculpture that produces a dramatic three-dimensional effect). As an avid collector of fine elephant art, I am delighted to display Miss Boonnaks masterpiece in my residential gallery and would recommend that others check out her handsome and impressive work. -- Mike Thompson, Florida USA

You can find our aluminum repousse panel 'Defeating the Giant' by Thiva Boonnak in wall decor categories such as Cultural Relief Panels, Repousse Relief Panels, Aluminum Relief Panels and Wood Relief Panels. Enjoy exploring these sections for other Novica treasures.

This artist uses traditional techniques handed down through the generations and/or creates culturally significant items, helping keep these traditions alive.

This artist positively impacts their community through job creation and provides jobs for 2 or more people.

The Boonnak's home witnessed the birth of silver crafting in Thailand at the turn of the 20th century. King Chulalongkorn was patron of the arts and settled Burmese craftsmen the area.

Thiva Boonnak speaks reflectively of her art amidst the scattered tools and the pieces in progress that fill her family's old-fashioned workshop.

"Our region's designs are all special. Each one is unique and grandiose." Her soft words echo the proud sentiments passed on by her family generations before her.

Thiva Boonnak tells how her father taught her and her brothers the silversmith craft, and how he showed them not only the technical, intricate skills, but also transmitted the smith's labor of love. With such passion flowing from their hearts to their hands it is not difficult to understand why the work of Thiva Boonnak's family is so highly esteemed in Thailand.

The Boonnak's home witnessed the birth of silver crafting in Thailand at the turn of the 20th century. King Chulalongkorn was patron of the arts and settled Burmese craftsmen in the area. They shared the secrets of their ancient and intricate craft, which the Boonnak family has since elevated to its highest plateau.
View all