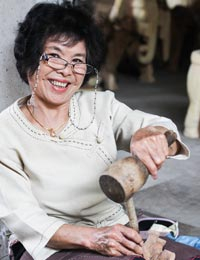 "Many people might think that men can be better than women at woodcarving, but not in my area."

"My name is Amporn Srihata. I was born in Sanpatong, a district southwest of Chiang Mai city on January 18, 1949. My parents had six children – five girls and one boy, and I am the third-born. Although I come from a large family, my husband and I have only one daughter. He is a retired government officer who worked as a teacher.

"My parents are no longer living, but they struggled to raise six children; it's a very hard job. I remember how we all helped our parents in the rice field and did many other odd jobs to help generate income. Still, we couldn't study past primary school except for my brother, who became a government teacher, and my youngest sister, who is currently an assistant professor at Chiang Mai University. Today I am taking high school classes. Even though we were poor, we were happy with what we had.

"After the rice was planted, there wasn't a lot of work to be had. When I was 19, Kamnan Khampan Thongtan, the leader of the villages in my area, hired carving masters to teach the young people in our village. This was wonderful for all of us. We not only learned a skill for our future careers, but we also received 6 baht a day for studying. That was a very good wage, as other people usually earned only 5 baht a day.

"I am one of six young people who learned how to carve at that time. I like it very much because I can do it quite well and because it brought me and my family more income. I've concentrated on that art form and was able to do woodcarving within three months.

"I worked with Phor Kamnan Khampan Thongtan for almost ten years. In 1977, he stopped his woodcarving business. By then, many people were doing woodcarvings, so his sales decreased. His income was no longer enough to cover all the costs. I had to sell my carvings by myself. It was very difficult to get a good price – shopkeepers tried to bargain too much and I hardly got enough money to cover the materials. Some items took several days or even a few weeks to complete. It was a number of years before I was able to handle it all in a way that was profitable. However now I have 23 people working with me.

"Many people might think that men can be better than women at woodcarving, but not in my area. Here it turned out that women can do better woodcarving work and more than 70 percent of the people who collaborate with me are women.

"In 2005, the government promoted our village to be the original wood carving village in Chiang Mai.

"As a northern Thai woman, I am so proud that I can have my own career and also generate work for more than 20 families in the area. My husband sometimes helps me deliver the woodcarvings to our shoppers, but I manage everything else by myself. I'm proud of my work and always strive to create only the best. I hope you will love it."

"Perfect for my Son & Grandson"

Elephant Joy is beautiful with a great deal of personality! I especially love his baby elephant eyes and upraised trunk!

I love this elephant carving! He is quite hefty and has a great deal of personality!

Beautifil design and craftmanship. Looks good where I have it. Excellent delivery. Thank you.

I love having this elephant in the room... Always makes me smile. Thank you you.

We love this cute little elephant.