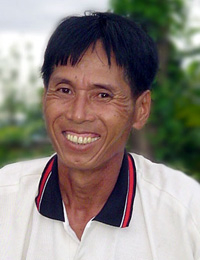 "[My work] gives me the feeling of achieving something grand, it gives me a spiritual strength that sustains me."

The artistry of Jamras Thapinta has been featured in various periodicals, including Midwest Parenting Magazine.

"My name is Jamras Thapinta and I was born in 1956 at the foot of Doi Saket, a little hill in the district of Chiang Mai, in northern Thailand. My childhood memories go back to 1962, when I would play by my father's side as he worked on wood. I was always impressed and admiring when he worked the wood, making every conceivable object: wooden utensils for my mother and our relatives, little bamboo toys for my sisters and me, etc. I guess it was a traditional activity in our rural village for he told me that he learned this craft from his grandfather. Of course, growing in a wood-making environment eventually got me imitating my father, rather banging on wood with his chisels than carving. All my friends and I used to play with wood at a very early age and we took it for granted, as it was a complete part of our life. For example I could effortlessly make my first wooden toy - a little horse - when I was only eight. By the way, I was so proud that I showed it to everyone in the village, deciding from that moment on that I would become in the future a wood expert.

"My parents were poor and could not send me past primary school, so I dropped out at eleven years old and studied wooden work with my relatives. At the beginning, even though I already quite mastered many techniques and knew the nature of wood, the grown-ups would not allow me to work on masterpieces. I had to work on thankless duties and general work, mostly assisting the old experts, but I progressively learned and eventually got rewarded with 200 bahts - five U.S. dollars - at fifteen years old, for a great finished carving, which took me two weeks to complete. Time went by and I learned various techniques and styles that can be applied to any kind of wood and for very different purposes. Birdcages are an example of the various styles, techniques and woods that can be blended to complete at once a practical and decorative wooden object. I loved woodwork so much but I never had enough money to buy raw material, and I consequently always worked for those who could invest money and employ my relatives and me - rather exploiting us.

"After marrying my wife at 25 years of age I looked for a job that would pay me better wages. We heard that construction business paid well so my friends and I all ended up building houses. A couple of years peacefully passed and we had our first son. The economy was healthy and people frenziedly borrowed loans from banks to buy cars, land, and to build houses, so much that our salaries allowed us to save some money. After careful consideration we pooled our savings with two friends and started running our own construction business. We rapidly earned quite good incomes that we immediately invested in our business. We eventually had enough money to amply support our families and even built our own houses, leading unworried lives for ten years.

"Then the economic crisis tremendously hit Thailand. The cost of living soared and people stopped buying, not to mention building houses. As a result, our incomes reduced to a point where we spent more than we earned. Besides, as they say, it never rains but it pours… machines started to break down, equipment to deteriorate, workers to quit and we pessimistically went to work everyday, anticipating with anguish what would next happen wrong. One of my friends/partners withdrew and my wife sensibly told me to follow him. But the money we invested plus that we borrowed became a lot of debts. I did not know how to stop our financial collapse, and the more I worked, the more I tried to figure out ways to clear my debts and the worse it became. My wife morally had supported me, up to the point where she could not take it anymore and we split up, taking our children with her. Now when I think back on it I realize that I was totally blinded by my obsession, and that there was actually no solution. Life is so unpredictable, for after having worked hard for twenty years I end up with nothing, I lost my family and my properties.

"I worked again on wood after my family left, firstly to pass time, and to think about something else, too. With time passing by I somehow perked up, rediscovering what I really loved to do, that passion of mine that is woodwork, and most importantly what is really important in life, what I really want and who I am. The construction of temples is an act of merit-making for the Thai people, and reproducing birdcages after temples gives me the feeling of achieving something grand, it gives me a spiritual strength that sustains me. Today my life seems to be starting again, along with my woodwork activity."

This bas relief plaque is visually & energetically powerful & evocative. It reminds me of when Buddha was sitting under the Bodhi tree being assaulted by Mara & his daughters, how he overcame their temptations to realize his awakening. What a lovely reminder to have in my home, that I too might overcome those same temptations & find my own awakening! Dear Jamras Thapinta, thank you so much for sharing your wonderful gift with me!

I wanted something to hang in front of a window in the interior of my house, because the sun is too strong. I thought about this panel for a long time because of the price, but m so happy I got it. Its beautiful with the sun sifting through it, and also wonderful when its dark outside, and the carving and gold accents are more visible. It also looks great at night, from the outside of the house, with lamplight coming through it.

This looks exactly as pictured. Very detailed and attractive. I use mine as a sculpture rather than a wall hanging. It reminds me of art my father brought home from South East Asia in the 1970s.

Beautiful and intricate carving. The colors in the wood are so intriguing.

I got this to use to keep my nosy neighbor from easily seeing into my window when its open. Since her window is at a slight angle, the thickness of the panel makes it very difficult to see anything but air can pass through. The artist has said they are not really for windows anymore. But thats exactly what I got it for. Following his directions, I am very careful to not have it in the window when its raining or blazing sun. I am also very careful not to shut the top window down too hard on it. It is gorgeous at night in my bedroom, with plants to the side of it and my dark wood furniture. I light some incense and I am in another part of the world, in the comfort of my own home.

Beautiful piece! We love it! Thank you !